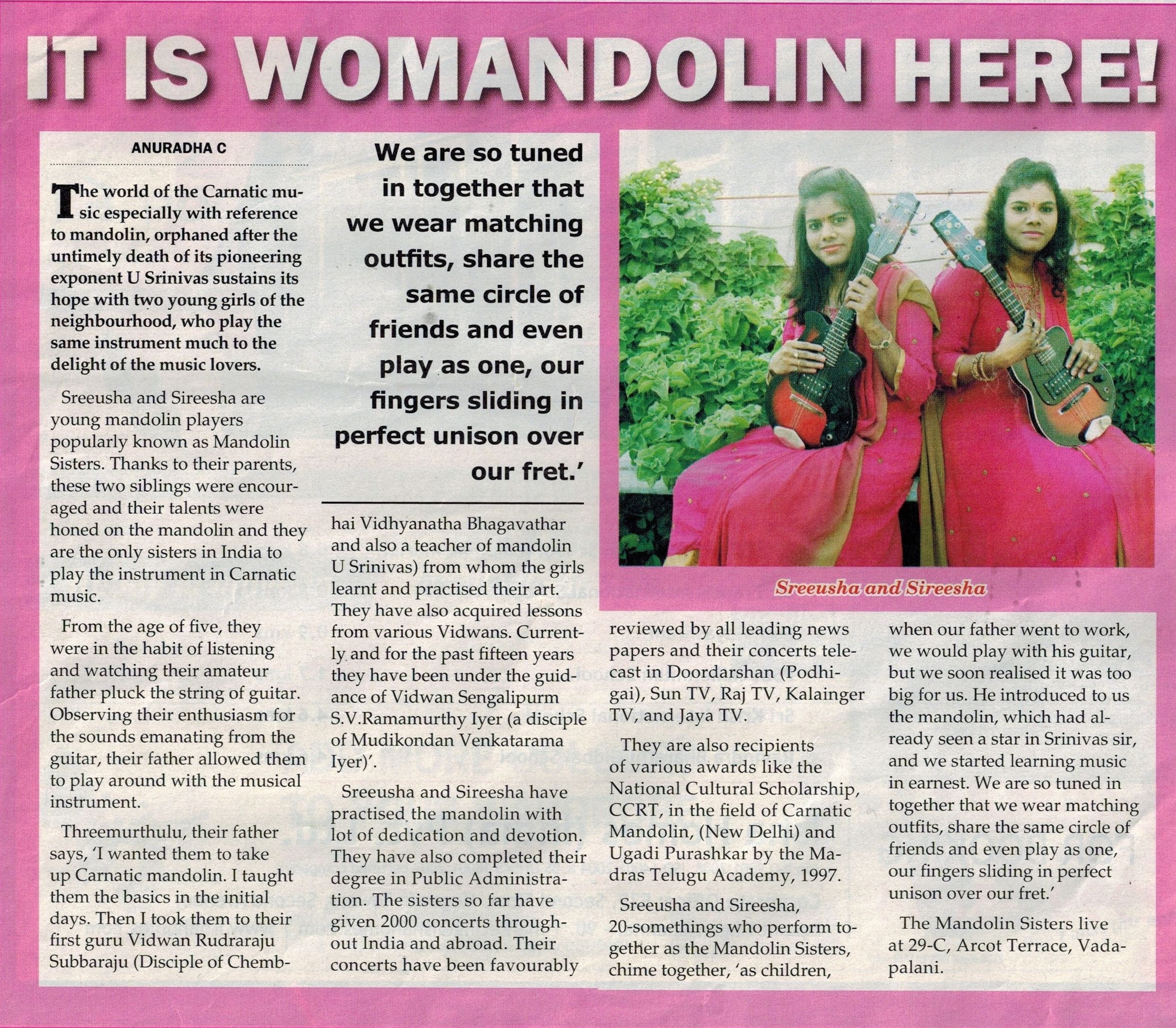 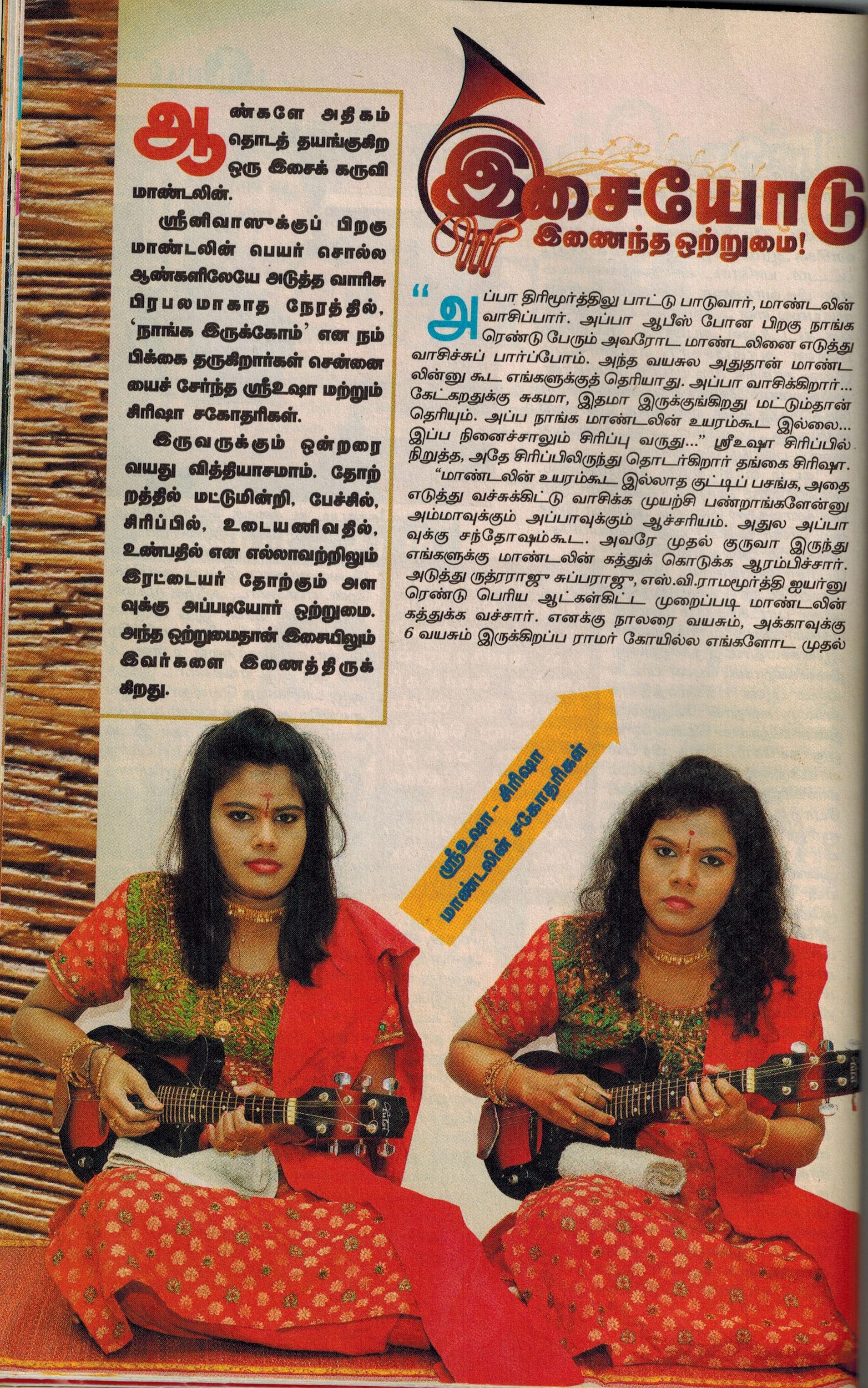 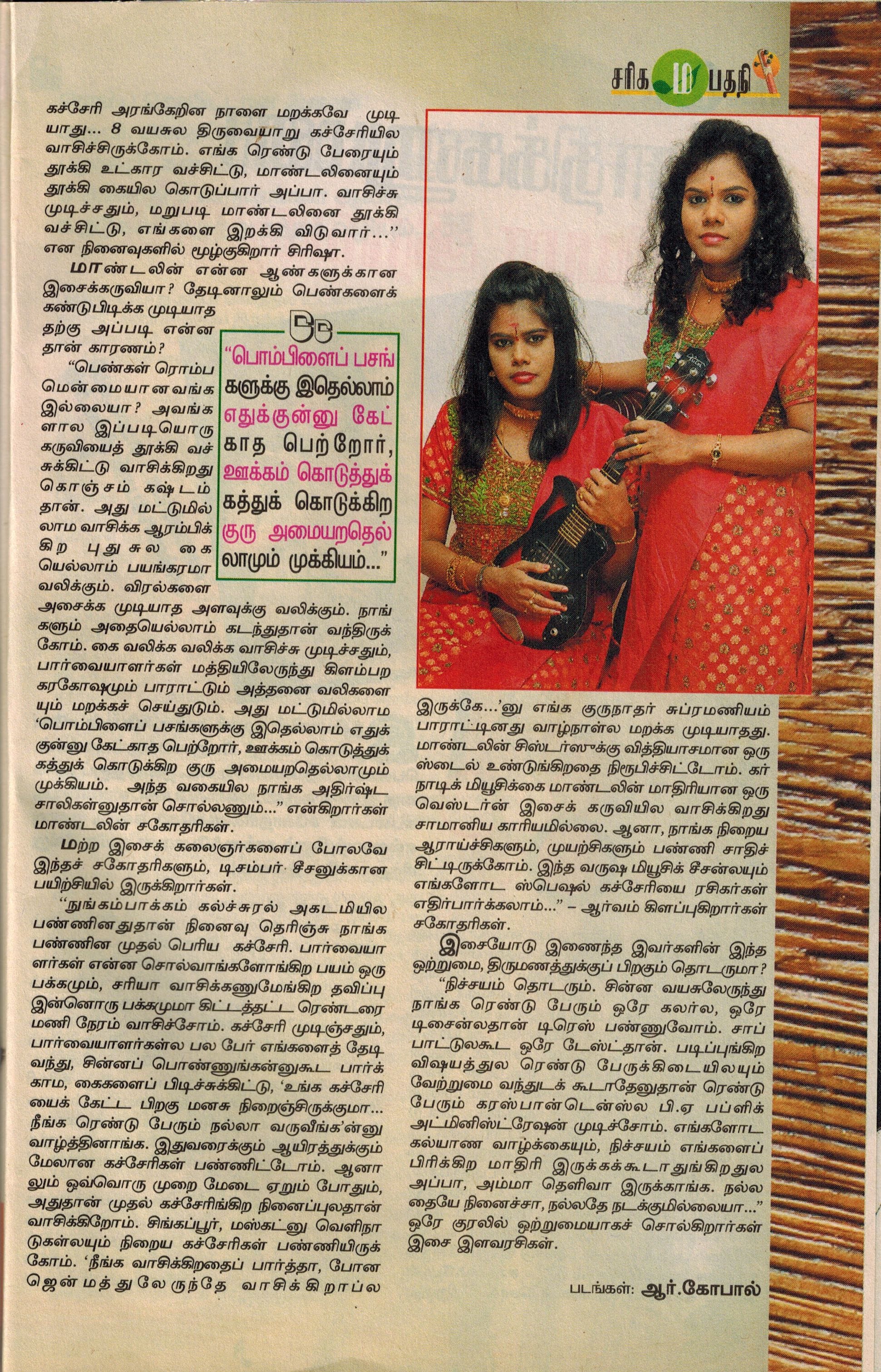 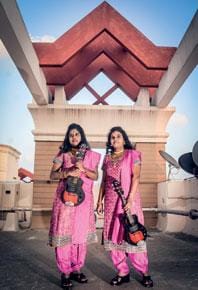 The rarefied world of the Carnatic mandolin, orphaned after the untimely death of its pioneering exponent U Shrinivas, faces an existential crisis says V.Shoba on Open Magazine

But genius is a wonderful thing, tempting and teasing you to emulate it, Ravikiran points out. At the cusp of a busy concert season in Chennai, Sreeusha and Sireesha, 20-somethings who perform together as the Mandolin Sisters, talk about how they took up the instrument. “As children, when our father went to work, we would play with his guitar, but we soon realised it was too big for us. He introduced to us the mandolin, which had already seen a star in Shrinivas sir, and we started learning music in earnest,” says Sreeusha. The sisters wear matching outfits, share the same circle of friends and even play as one, their fingers sliding in perfect unison over their fretboards. “Sometimes when we play back recordings of our concerts, I am not sure if I played a particular alap or she did,” Sireesha says, pausing in the midst of a much- rehearsed piece in raga kedaram in the living room of their apartment in Vadapalani. Studying music under a vocalist who told them to treat the instrument as an extension of the voice, they have been touring and playing concerts for a decade, but it is impossible for a mandolinist not to be aware of the weight of time and of Shrinivas’ legacy. “He will remain the touchstone, the gold standard. Children learning the instrument are under serious pressure to match his talent at a very young age. If you have crossed 20, you are already too old to be a genius,” says Aravind Radhakrishnan, a parent from New Orleans whose 12-year-old son Pranik is a “casual player” of the Carnatic mandolin, coached by a violinist.

Can this generation of mandolinists, playing under duress to a cynical audience, guarantee a future for the instrument in the Carnatic ecosystem? “You may as well ask what will happen to the saxophone if Kadri Gopalnath stopped playing,” says Ravikiran. “Such instruments have few practitioners, and certainly none to rival the star status of these pioneers.” 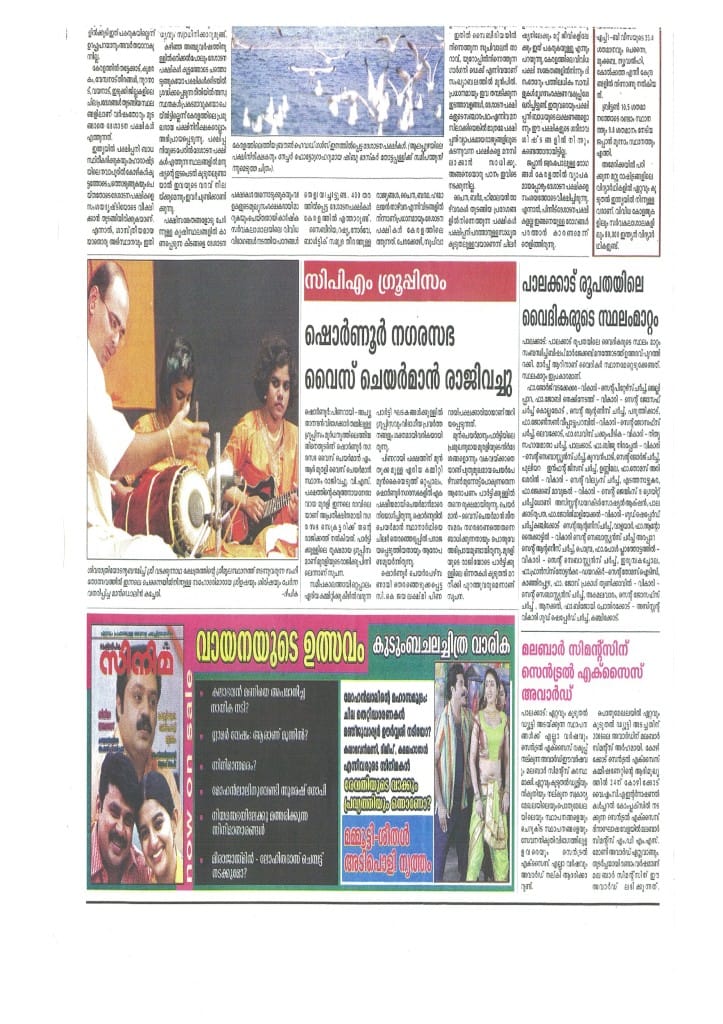 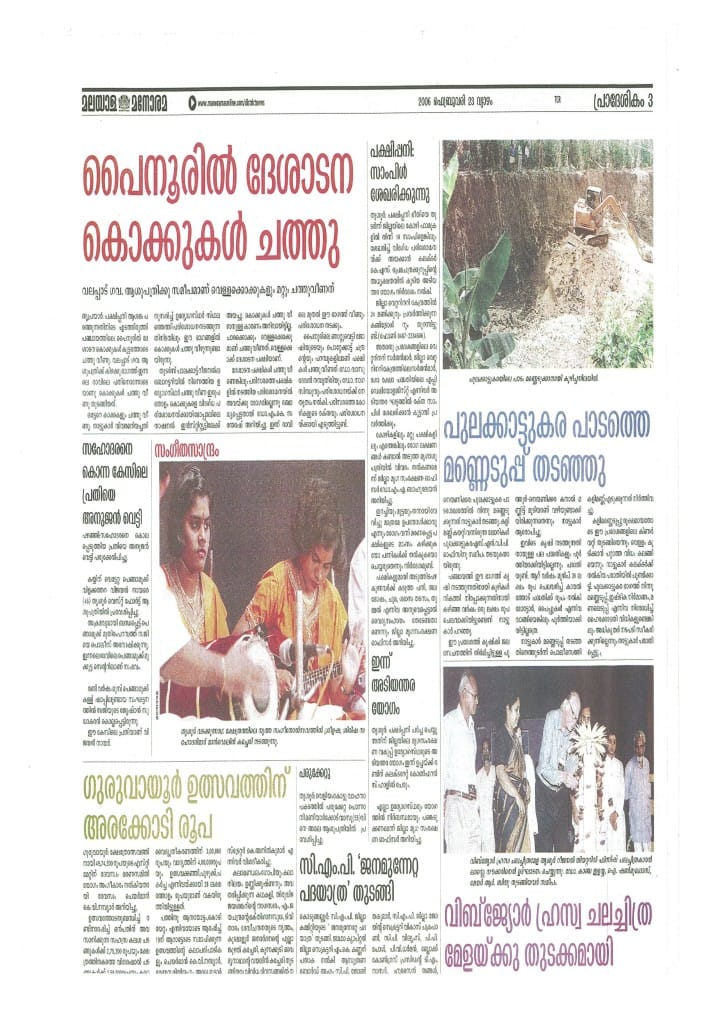 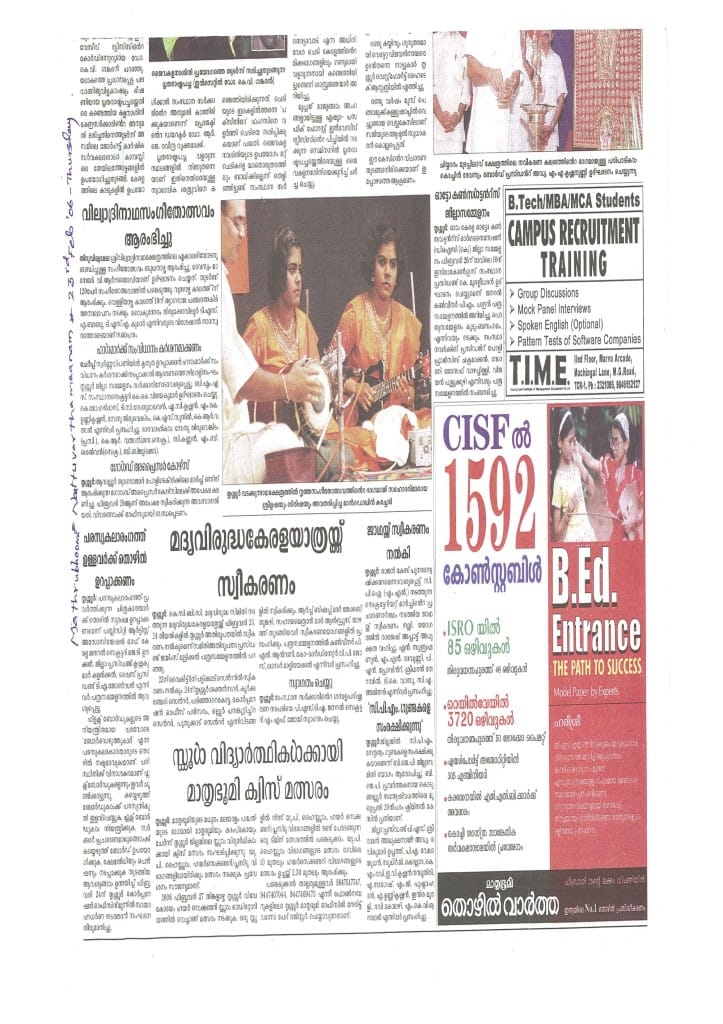 The Mandolin Sisters, M. Sreeusha and M. Sireesha, enthralled the audience at the same venue with the pleasing melody that flowed through their deft fingers.The sisters have come a long way in their music journey. ‘Vinayaka Ninnuvina,’ the kriti in Hamsadhwani was followed by dazzling kalpanaswaras. The duo delved deeper into the raga and unearthed its beauty through their lively exchange.

Ritigowla featured in their concerts too. But they had chosen the well-known ‘Nannu Vidachi Kadalakura’ by Tyagaraja. The delineation of Kalyani was another wholesome attempt.

The good co-ordination between the sisters is a very important factor that has contributed to their popularity. ‘Eppavaruvaro’ in Jonpuri was a feat in speed. It was admirable and evoked admiration for their skill. But whether Gopalakrishna Bharati, who composed this song with such intense yearning for the lord, would have approved of it is a moot question. Umayalpuram V.Kalyanaraman on the mridangam and N. Rajaraman on the ghatam gave efficient support to the sisters and presented an entertaining thani.

Printer friendly page
Send this article to Friends by E-Mail